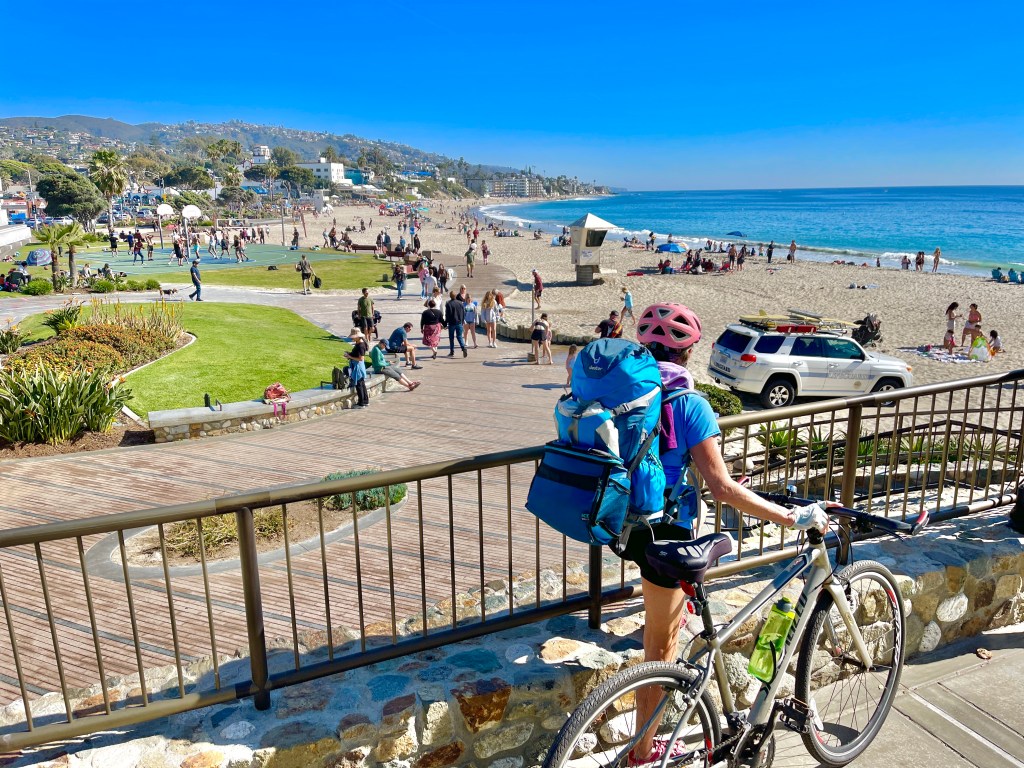 I’m torn between hating and loving Southern California. I’m disgusted by the human congestion, but enamored by the seaside cycling lifestyle. a week from Santa Monica to San Clemente with a rental car shuttle until we left.

Gear loaded, we hopped in the truck to take our dog, Gem to Fresno for a visit with her husky siblings. Like a couple vacationing with their child safe and happy at camp, we continued our carefree journey south through the blossoming orchards of the Central Valley, stopping at the Sun Maid factory store for a mix of raisin snacks. The carefree tone changed as we climbed Highway 5 over the vineyard where puffy black clouds bombarded the road with freezing rain gradually engulfing us in a white blanket of snow for several winding miles. I was so relieved to see blue spots all over Santa Monica that even the dreaded freeway traffic didn’t faze me.

The Channel Road Inn, one of many boutique hotels in Monterey’s Four Sisters Inns collection, was the perfect base camp for our adventure. David and I reveled in the historic charm of the property, embracing hospitality and chic comfort at the edge of a quiet residential area, just steps from the beach path.

Access to free street parking until we returned boded well as we left with our 20 pound bag and the morning sun on our shoulders. Our butts made peace with the not-so-comfortable seat as we cruised past Venice Beach and through Marina del Rey on the 22-mile-long Marvin Braude Bike Path, named after a Los Angeles city councilman. We stopped at the Redondo Beach pier to stretch and read about George Freeth, America’s first surfer and the first “official lifeguard on the Pacific Coast”.

In Torrance, we swapped the flat beach path for an ascent to the cliffs of Palos Verdes. By the time we reached the ridge of Malaga Cove, it was going to take more than stunning scenery to keep me happy. The pastries from the Yellow Vase Bakery were tempting, but a Belgian Magnum ice cream bar covered in double caramel chocolate from the Cove Market proved the ultimate caffeine booster. Smile on my face, we continued for another 10 miles to the isolated Point Vicente Lighthouse. The angle of the sun and the cooling breeze announced it was time to settle in for the night and the resort town of Terranea was the closest option. The splurge paid off with a spacious room, great view, heated pool, patio, and a moonlit path for our evening walk.

Looking at the calendar over breakfast, we snapped out of la-di-da mode realizing that President’s Day was approaching. We needed to book hotel rooms right away! Our hopes of weekend nights at the Four Sisters Newport Beach Hotel on the Balboa Peninsula were quickly dashed, but a few clicks of Google and a stroke of luck landed us a reservation at the Balboa Inn.

We traveled up the PCH (Pacific Coast Highway), zigzagged to the Point Fermin Lighthouse and braved the gauntlet of Port of Los Angeles tractor-trailer traffic and the daunting maze of bridges across San Pedro Bay before reach Pierpoint Landing, a Long Beach tourist facility.

The mood got tense at mile 40 before we realized the numb rumps were to blame. Tension diffused with humour, we set our sights on Huntington Beach for a burst of energy at the Magnum bar to travel the last 10 kilometers to the Balboa Inn. A hot shower and the view from our second floor corner balcony room overlooking Balboa Pier was a fitting reward after a strenuous day. The location was convenient to the old spaghetti factory for a cheap pasta dinner and a side of nostalgia as David remembered working here while in law school.

Our planned “rest” stop began with an early morning ferry hop to idyllic Balboa Island and ended with a 20 mile loop around Newport Beach and the Back Bay Nature Preserve.

Back on our wheels, our fifth day of coastal sampling took us to the historic Crystal Cove State Park area and restored 1920s beachfront rental cottages. Powered by a Shake Shack burger topped with a caramel sundae and a frothy vanilla shake, we headed out of Crystal Cove towards Laguna Beach. “wannabe in the middle of a parking lot. Shifting to an attitude of gratitude for snagging a bed and shower on a holiday weekend, we focused on enjoying strolling along Heisler Park’s scenic boardwalk above pocket beaches and critiquing the ‘art. The Faux Paw Artique gallery full of amazing ceramics, whimsical paintings and custom accessories was a canine and feline lover’s dream!

Of all the beach communities, Dana Point was my favorite. Richard Henry Dana Jr. called this area “the only romantic spot on the California coast” in his book “Two Years Before the Mast,” an account of his 1834-1835 voyage aboard the merchant sailing ship Pilgrim. From the penultimate day, we combined cycling around the historic monument with hiking on the headland conservation trails.

The Blue Lantern Inn, another home run in the Four Sisters collection, exuded quiet elegance on the promontory of Dana Point overlooking the Riviera-like marina. That evening, the Chart House’s cliffside patio was an idyllic vantage point for a harbor-view dinner.

We lingered over the Blue Lantern’s elaborate breakfast on our final day in hopes of extending what had been a fabulous week of coasting touring. Our terminus was the Spanish-style hamlet of San Clemente, but feeling ambitious with time on our hands, we decided to do an additional 30 mile coastal round trip to Marine Corps Base Camp Pendleton before having dinner. on San Clemente Pier.

That evening, enjoying the glow and joy of the week’s successful excursion, we looked forward to returning for a drive through the next string of beach towns in San Diego.

Linda B. Mullally and her husband David share their passion for travel, outdoor recreation and dogs through articles, hiking books and photography on www.lindabmullally.com, Falcon.com and Facebook