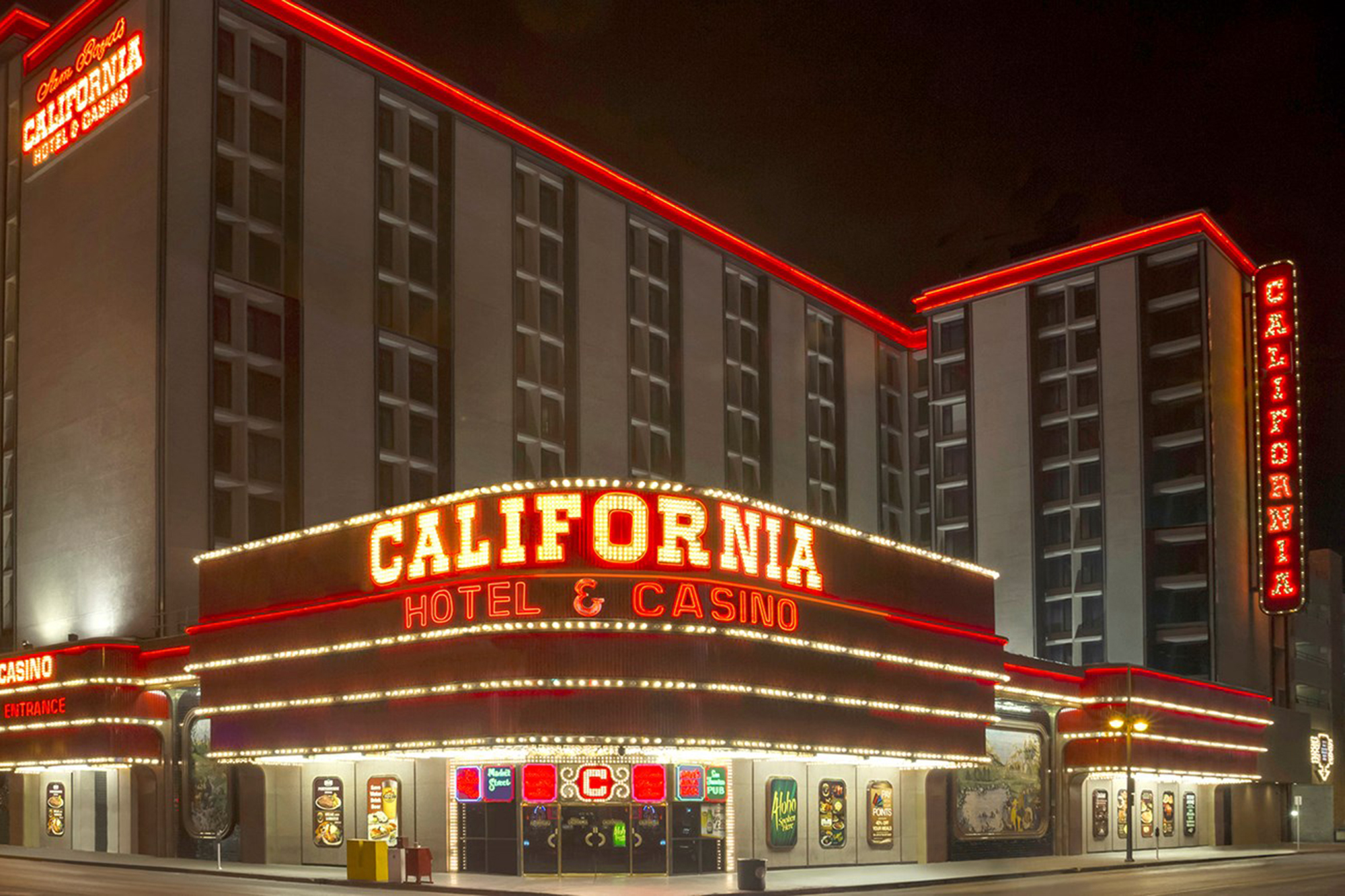 Did you know that up to 40 high school class reunions for Hawaiian high schools are held in Las Vegas per year? Or that in Hawaii you can buy special greeting cards just to commemorate upcoming trips to Las Vegas?

About 1 in 10 Hawaiian citizens visit Las Vegas each year, and many visit two or three times a year. And when they arrive in the city that has become affectionately known as â€œThe Ninth Island,â€ they overwhelmingly choose to stay and gamble at the California Hotel, owned by Boyd Gaming Corp. near Fremont Street.

Originally opened in 1975 to target the Southern California market, “The Cal” features exterior murals celebrating the Gold Rush of 1849, the construction of the Transcontinental Railroad and the natural beauty of the foothills of the Sierra mountains. The interior, however, reflects its 40-year history of transforming into a Hawaiian home away from home, with island-themed decor, banquet halls labeled in the Hawaiian language, and several restaurants featuring Hawaiian fare.

Our quest to understand how the Hawaiian affection for Las Vegas began, and has since continued, led us to a detailed review of this hotel property in the heart of the Hawaiian-Las Vegas experience. What do Vegas and The Cal have to offer that make the cost and inconvenience of traveling the nearly 3,000 miles in the desert interesting for islanders in paradise? Why do they choose Las Vegas as a recurring destination over any other place in the world, coming back year after year to spend their money and vacation time here?

In the literature of the anthropology of tourism, the idea of â€‹â€‹a place in the imaginaries and desires of tourists is called its “imaginary”. For example, the â€œHawaiian fantasyâ€ that draws tourists to Hawaii is that of a tropical paradise with friendly hosts, wonderful weather, beautiful beaches, and exotic opportunities to relax or venture out on your own. We now seek to understand the â€œLas Vegas fantasyâ€ in the hearts and minds of Hawaiians that draws them here.

To that end, we have come to the Lied Library Special Collections and Archives to review Boyd Gaming Corp. materials, internal newsletters, employee interviews, and promotional material regarding The Cal. These sources give us some insight into how the company has tried and succeeded in making its hotel the heart of the Hawaiian Las Vegas experience. Come and discover some discoveries.

Cynthia Van Gilder obtained her Masters and Doctorate degrees. from the University of California at Berkeley, where she studied the socio-politics of Polynesian archeology, ethnic identity, and cultural heritage narratives. Since joining the anthropology faculty of St. Mary’s College of California, Van Gilder has published on gender and household archeology in Hawai’i, the use of theory of practice in archeology and the anthropology of tourism. This “Hawaiian Vegas” research builds on her long-standing interests in how narratives of cultural identity are constructed, experienced, and maintained, particularly in Hawai’i ethnically.

Dana R. Herrera received her Masters and Doctorate degrees. from the University of California at Davis, where she conducted ethnographic research on the intersections of race, gender, and religion with political affiliation in the Philippines. Since joining the Faculty of Anthropology at St. Mary’s College of California, her research has focused on identity building in online gaming communities, the Filipino diaspora in Central Europe, and the anthropology of tourism. This â€œHawaiian Vegasâ€ project builds on his long-standing interests in the tourism economy and globalized patterns of ethnic migration / movement, particularly among diverse Asian communities.

Gilder and Herrera and 2018 Eadington Fellows at the UNLV Center for Gaming Research. The residency program allows researchers around the world to tap into the unique archives of the special collections of UNLV libraries.

Top 10 California Parks You Must See Before You Die