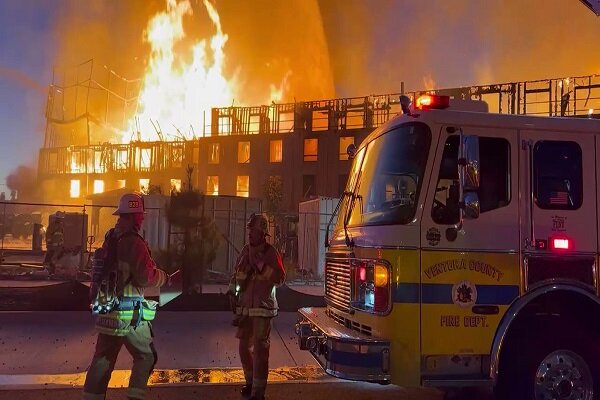 A massive fire engulfs a four-story hotel under construction in Camarillo as Main Street is closed over fears the building could collapse.

Social media posts from local residents revealed that the structure was a hotel under construction. Details posted by the Ventura County Police Scanner account on Twitter indicate that additional aerial ladders, along with at least five other engines, were called to the scene.

The four-story hotel was being built near Las Posas Road and Ventura Boulevard, where the Camarillo Premium Outlets are located, along with other hotels, stores and restaurants. One Twitter user wrote: “Well there’s a structural fire at the Camarillo Outlets…the new hotels they were building.”

An unofficial fire news account on Twitter shared a terrifying video of firefighters working to put out the flames.

At the time of the fire, @CAFireScanner reported spot fires near US-101, causing the California Highway Patrol to close the freeway in both directions. It is not known if there were any injuries or deaths caused by the fire.