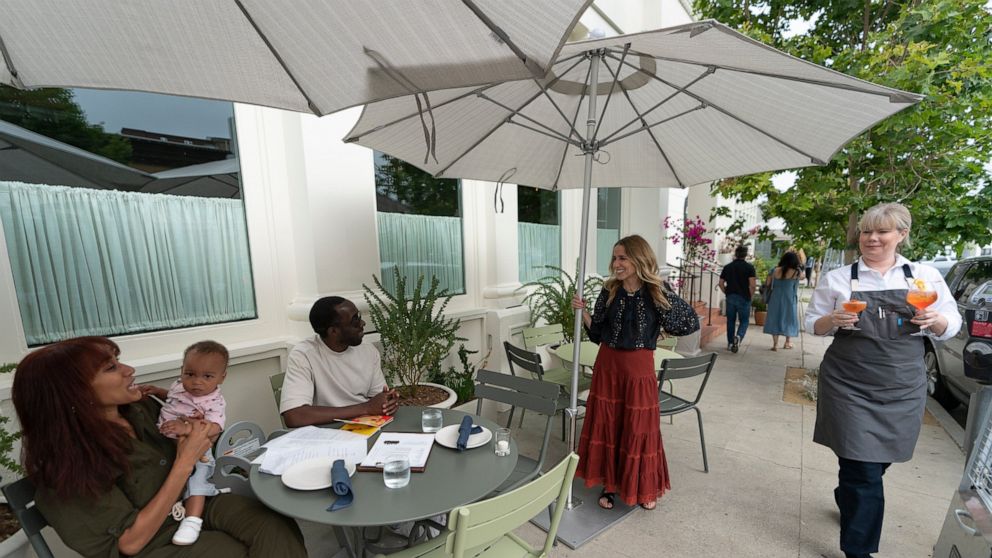 Villanueva would hire 100 more if she could, but she can’t find anyone to fill the vacancies.

“We are in the midst of a very serious labor shortage,” said Villanueva, owner and managing partner of Acme Hospitality, which operates eight restaurants in the popular beach destination, although two remain closed. With staff stretched out like a paper towel, employees are “doing the work of two people”.

California fully reopened its economy on June 15 and removed capacity limits on restaurants, retail stores and other businesses. People are eager to return to sporting events and amusement parks and enjoy a restaurant meal.

But instead of full dining rooms, many restaurants are being forced to reduce opening hours or leave tables open. Villanueva’s company offers cash bonuses to workers who recruit new employees.

The labor shortage is also affecting restaurants across the United States.

At Served Global Dining restaurant in Henderson, Nevada, a suburb of Las Vegas, chef-owner Matthew Meyer said he needed a dozen or more people to fill positions at all levels, including cooks and bartenders.

Plans for a raw seafood bar, take-out kits and a chef’s table to serve special tasting menus are on hold because he can’t find enough workers. Meanwhile, his labor costs have risen by a third as he has to offer more money to attract applicants. Even then, the last two he had scheduled for interviews never showed up.

“We are facing extreme difficulties,” he said.

The California Restaurant Association earlier estimated that a third of restaurants in the state would not survive the pandemic. For those who survived, the jobs deficit is a “crisis in its own right”, said Jot Condie, who leads the organization.

Democratic Governor Gavin Newsom likes to say that California’s economy is booming. Indeed, jobs numbers released Friday showed the state added more than 100,000 jobs in May, the fourth consecutive month of gains after 2.7 million jobs disappeared in the first few months of the pandemic.

But in the state’s battered restaurant industry, the return to normal is being slowed by the struggle to find sufficient numbers of cooks, bartenders, servers and kitchen staff. Since May 2020, restaurants and hotels have added 420,400 jobs – the most of any sector – but the industry remains about 450,000 jobs below its pre-pandemic level.

In Los Angeles, Caroline Styne, owner and director of Lucques Group Wines, turned away dozens of customers because she didn’t have the staff to serve them, leaving seats empty.

“Hiring is a nightmare,” she added. “I have never been in such a situation.”

The industry is notoriously volatile, and restaurant workers can be transient — students coming in and out of shifts as time allows, aspiring actors and musicians looking to supplement their incomes, kitchen workers leave for bigger paydays elsewhere. The hours can be long, the benefits few, and the pay low, sometimes reliant on tips.

Among them: California’s population plummeted by 182,000 last year as the pandemic ravaged the economy, scattering workers across the country as many businesses closed. Some workers are reluctant to return, either out of lingering fear of the virus or frayed nerves after battling intermittent lockdowns, home isolation and changing health regulations.

Extended federal unemployment benefits have provided a cushion to stay at home — about 2 million people are still receiving checks. In other cases, there is a childcare problem with schools closed or on vacation for the summer. And after taking a long break from work to think about the future, others have taken a new career path.

For some workers who didn’t return, “the trauma and uncertainty of the past year and a half was just too much,” Villanueva said.

Meyer, the Nevada leader, blames extended government benefits for a lack of job applicants. “As long as they keep giving away free money, that’s where people are,” he lamented.

Restaurants and hotels have been ‘ground zero’ for labor shortages, but other sectors are struggling to fill jobs, including non-union construction and home health care, said Michael Bernick, former director of the California Employment Development Department and attorney. with the law firm Duane Morris.

For struggling restaurants, a turning point may not come until late summer, when enhanced federal benefits end and schools reopen.

Even then, “there may still be a shortage and then either wages will rise enough to attract workers or hospitality venues will find they need to change their delivery models,” Bernick said in an email. mail.

On Saturday, Alec Nedelman was enjoying an early Father’s Day celebration with his family at one of Styne’s AOC restaurants in Los Angeles. The lawyer said he had just started returning to restaurants since dining rooms began to reopen and was also looking forward to having them available for business meetings.

“It’s always a mixed feeling. You’re still a little cautious and worried,” Nedelman said. But “I can’t wait to be able to be social again.”