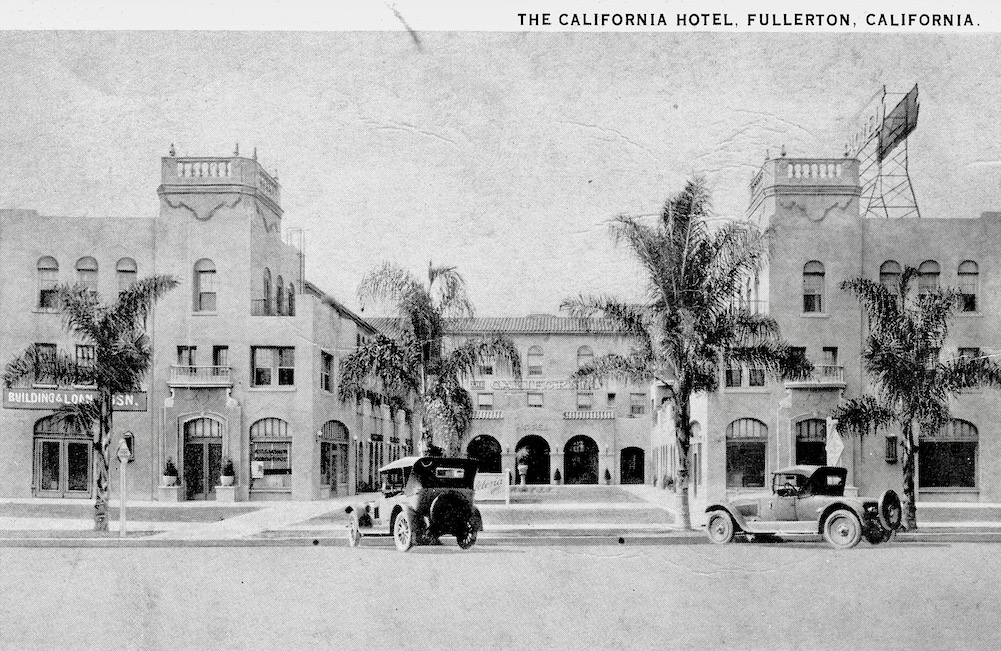 The California Hotel, now Villa del Sol (305 N Harbor Blvd), opened as a Class A hotel on January 15, 1922, with 22 apartments, 55 rooms, 10 first-floor storefronts, two kitchens, one bathroom dining room and a large elaborate dining room. The three-story Spanish Colonial Revival U-shaped stucco-on-brick building included a landscaped courtyard, something not found in other downtown developments. The modern hotel was one of the few buildings constructed with funds raised by public subscription. It was also the only one built to replace a public toilet block. The building was designed by renowned Anaheim architect, Mr. Eugene Durfee, who also developed plans for the adjacent Chapman Building. The hotel quickly became the social hub of Fullerton, quickly becoming the place to stay when visiting the area.

California Hotel in the 1920s. Photo courtesy of Fullerton Heritage.

In 1964, the owners planned to demolish the hotel and build a car wash. After serious opposition to this plan from the community, in 1965 the hotel was redeveloped into a series of small shops, restaurants and offices. The building lost some of its visual effect when it was converted for commercial use, particularly when a new two-storey addition was added to the front, surrounding the courtyard.

The new owners in 1995 agreed to construct the necessary seismic structural upgrades in a manner that would not visually impact the building, thereby preserving one of Fullerton’s major historic buildings. Although the building is a designated local landmark, the addition on the front makes it ineligible for listing on the National Register.

The current owners take care of the property and are no doubt proud that it turned 100 on January 15, 2022.

Protect local journalism – please subscribe to the print edition of the Fullerton Observer. Our online edition is free, but we depend on print subscriptions from readers. Annual subscription is only $35/year. It just takes a minute – Click here to subscribe. Thank you for your support of the Fullerton Observer. Click here to see a copy of the print edition.