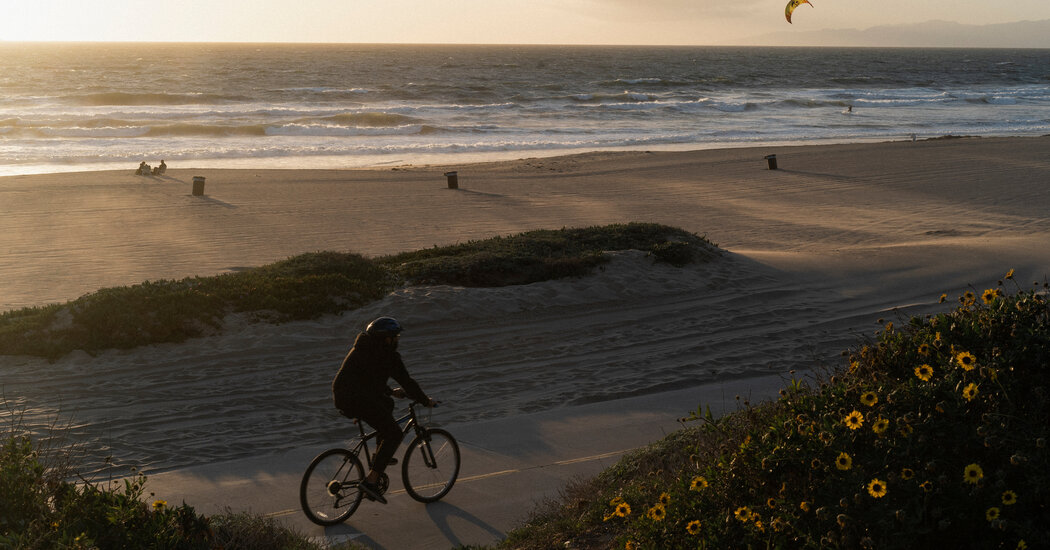 California Beach seized in 1924 from black family could be returned

Almost a century after a Southern California city closed a black couple-owned resort, the city, county, and state are still grappling with how to right the wrongs of the past.

The resort was established by Willa and Charles Bruce in Manhattan Beach, California in 1912. During the Jim Crow era, they built a destination where black tourists could swim, dance, eat, and rest. But in 1924, Manhattan Beach officials invoked eminent domain and condemned the Bruce lands.

The Bruces fought the move, but ultimately lost their business and were paid $ 14,500 – or $ 224,603 today, adjusted for inflation – for the property. They moved to Los Angeles.

When the land was seized, the city claimed it needed it for a public park, but then left it undeveloped for more than three decades. Today it is owned by Los Angeles County and is home to a lifeguard training center.

This past summer, activists in Manhattan Beach – as well as nationwide protests against racism and police brutality – sparked renewed interest in the Bruces.

County and state officials are now taking action to return the property to the couple’s descendants.

While officials in Manhattan Beach – a small community south of Los Angeles where black residents make up less than 1% of the population – plan to commemorate the Bruces with plaques and an art installation, city council decided this month – that he would not issue a formal apology to the family.

“We recognize and condemn what our city ancestors and some white residents did to Willa and Charles Bruce, four other black families and a few dozen white families 100 years ago,” said Suzanne Hadley, Mayor of Manhattan Beach. , in an email. “But I don’t agree that our present city must wear a scarlet R embroidered on our chest for the end of time.”

Anthony Bruce, 38, the great-great-grandson of Charles and Willa, praised state and county officials but said he was not happy with the city. “I think an apology would be the least they can do,” he said.

Last month, Janice Hahn, a Los Angeles County supervisor, said she was ready to return the land to the Bruce descendants. She called the seizure “an injustice inflicted not only on Willa and Charles Bruce, but on generations of their descendants who would almost certainly be millionaires had they been able to hold onto this seaside property.”

But there was a catch: Under California law, the transfer would violate restrictions imposed by the state when it transferred the land to the county. Steven Bradford, a Democratic state senator, has announced that he is bringing forward a bill that would allow the transfer.

â€œThis is an example of what repairs could look like, in California and across the country,â€ he said.

Manhattan Beach has grappled with the history of the resort town of Bruces for years. Bob Brigham, a longtime Manhattan Beach High School teacher who died in 2019, compiled research on the complex for a thesis in 1956. A park near the Lifeguard Training Center was renamed Bruce’s Beach in 2007.

In October, city officials convened a task force to consider recommendations to right historic wrongs. The business has sparked emotional discussions and personality conflicts over history, reparations, and racism in the past and present.

Some residents have felt a subtle change in the community.

â€œI feel like the energy has changed,â€ said Allison Hales, 40, a Manhattan Beach resident who was a member of the task force. â€œThere is such a division now. “

By the time the apology recommended by the task force first appeared on city council’s agenda last month, it had become a lightning rod. Some residents have argued that an apology would place unfair blame on the city’s current residents. Others were dismayed that Manhattan Beach refused to apologize for deporting African Americans.

In March, an ad urging the city to reject the apology appeared in The Beach Reporter, a local newspaper.

â€œWe have been falsely accused of being a racist city! said the ad, which was posted anonymously and said it was paid for by “concerned citizens” who were “a network of many”.

Ms Hales, who said she found the ad disturbing, worked to create another one in favor of the apology. It appeared in the same newspaper and signed by hundreds of locals.

â€œIt was a proud moment to see the community come together and allow their names to be printed,â€ she said.

On April 6, in a virtual meeting that lasted more than five hours, the city council voted, 4 to 1, to adopt a “declaration of recognition and condemnation” but offered no apology. .

Joe Franklin, the board member who drafted the acknowledgment, said at the meeting that “if the city apologizes today for what happened 100 years ago, it would be attributing the events blamed a large majority of our residents living here now. “

He and Mrs Hadley, the mayor, condemned the racism against the Bruces, but said an apology could increase the risk of litigation against the town.

â€œOur legal system includes a statute of limitations for a reason,â€ Ms. Hadley said. “One hundred years later the best thing to do is learn from our history, teach ourselves and our children so that it never happens again and move forward promising to do better. . “

Mr. Bruce and Duane Yellow Feather Shepard, a relative of the Bruce family who lives in Los Angeles and is a chief of the Pocasset Wampanoag tribe of the Pokanoket Nation, condemned the decision not to apologize and called on the city to pay compensation.

â€œThey keep falling apart trying to show they’re not racist,â€ Mr. Shepard said of city officials. “And everything they do shows more racism.”

Both men said the county and state legislature appeared to be taking steps in the right direction. Mr Bruce added that he hoped the land transfer could set a precedent for black families who have been dispossessed across the United States.

Alison Rose Jefferson, an Los Angeles-based historian who wrote about the Bruces and other families in her book “Living the California Dream: African American Recreation Sites During the Jim Crow Era,” said ” there is good coming from people. understand this story “but added that the city” was missing an opportunity to be part of righting the wrongs done to blacks “.

Kavon Ward, 39, an organizer and Manhattan Beach resident who founded a group called Justice for Bruce’s Beach to support the family’s calls for restitution, said the effort to return the land was “incredible news.” , although the county cannot take any formal action until the state bill is approved.

â€œWe’re always doing what we need to do, behind the scenes, to make sure they get the votes,â€ Ms. Ward said. â€œWe are still working. “