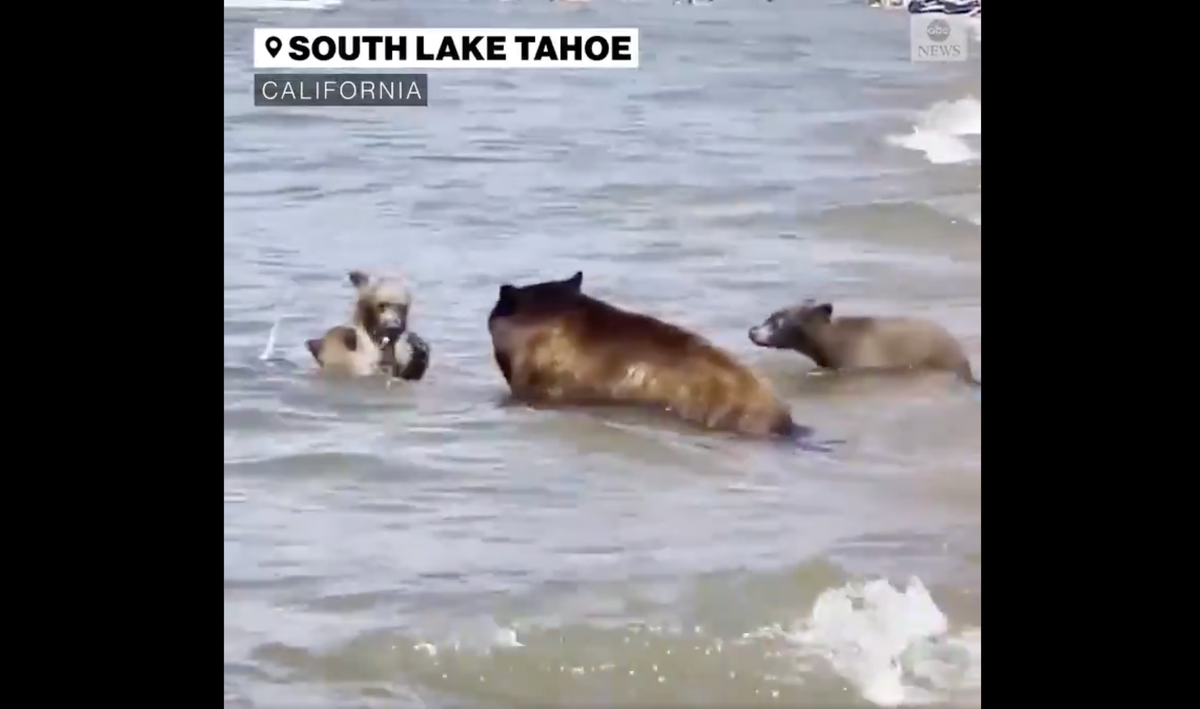 Images have sparked an online debate that shows a female bear and her cubs swimming on a California beach during the heat wave that is currently engulfing large parts of the western United States.

In the video, a mother black bear is seen swimming in Lake Tahoe with her three cubs on a crowded beach with people trying to beat the heat on South Lake Tahoe. According to new reports, the temperature has reached 32 Â° C. Temperatures have recently reached 48 Â° C.

Some believe the bear was fleeing the heat. However, locals pointed out that bears aren’t as scared of people as many believe.

Throughout the heat wave, there have been reports of animals affected by the record temperatures the area is experiencing. Habitats have been affected by forest fires, droughts and other environmental consequences.

The bear family discussion was sparked by a Twitter user who wrote: ‘Do you all understand how hot it must have been for this bear to bring his cubs near all these people. The woman who filmed the bears swimming said people on the beach were “shocked” to see them there.

Lola Saffy replied, â€œThat poor mama bear. She and her poor little ones had to roast. She was probably also a little like, “Come on kids, this thermometer isn’t going to go down anytime soon.” These people didn’t seem nervous ???! “

â€œThe wild part is not that they go swimming. Ofc bears swim all the time. another person wrote. â€œThe wild part is that this mother bear took her cubs to swim NEAR THE HUMANS. Bears are known for their protective and territorial character, ESPECIALLY mothers. It is a huge risk to be near humans.

However, locals have reported that this is more normal than it looks.

â€œI live in Lake Tahoe, it’s not weird. We meet bears at least once a week at my place. Especially since I walk my dogs twice a day. They don’t bother people. It didn’t go over 92 last week. Yes, it’s hot this time around, but not abnormal to see a bear and cubs bathing, â€someone wrote in response.

â€œI live in Lake Tahoe. The bears are quite used to ppl as I often see them on my bike, in the car etc. Another resident wrote.

However, what can be agreed is how strange it is to see a bear in a place full of humans. This was the case with Jennifer Watkins, a woman who was at the beach.

She told KCRA: “We were all a little shocked” by the sighting of the bear.

Local law enforcement said being so close to the bears was “very dangerous.”

“We are in their territory when we are in the Foothills and the Sierra [Nevada]Lt. Nelson Resendes of the Placer County Sheriff‘s Office told KCRA. “Don’t feed them, don’t attract them, don’t provoke them and obviously in a setting like this … don’t approach them … respect their space.”

There have been reports of black bears suffering from encephalitis, a disease of the brain. It is a condition that causes the animal to lower its guard around humans. As of March 2020, four bears have reportedly been diagnosed with the disease. It is a virus, which can also be found in humans.

Local authorities, such as the California Department of Fish and Wildlife and Placer County Sherriff’s Office, are monitoring the situation and working to address the problem of bears found in areas with high human populations.